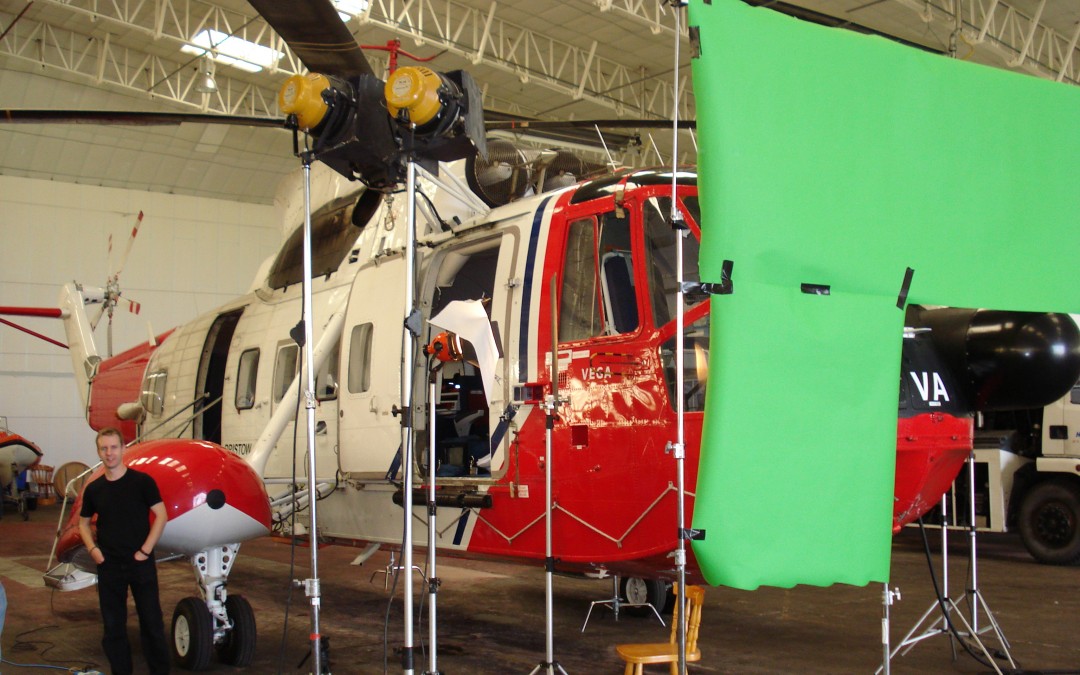 At the moment I seem to be doing a lot of green screen work, whether on location or in our studio at TNT Films, even to the point of painting our large white stage green so a horse could walk across it, along with a dog or three, chicken, even a cat (although it spent most of its time up a curtain). Just about everything decided to leave a calling card too, the glamour of TV!

For those of you that are interested, I shall explain some of the common problems with green screen and how to overcome them.

These are probably the hardest things to see how to cure and normally one of the easiest to cure. Remember that the distance between the foreground and background can be as far as you can make it. The further away the background is from the subject. the easier it is for the shadow to fall away out of the shot. Do remember that the further the green is away from the camera, the less green space your subject has to work in. Anything that crosses off of the green screen will be very difficult to key out, unless you like tracing frame by frame! Don’t make the mistake of trying to light your way out of a problem, you just end up with more shadows and a big headache.

For full length green screen there are further complications. the shadow always fall on the screen and the complex shadows between the feet of a stood subject can cause difficulties.

Remember to light the subject first and get exposure on them. You shouldn’t need much more then f4. Backlight works well, especially if you know the predominant source of light on your plate shot (that’s the one you are going to replace the green with). Make the key angle similar to the plate as well. Often people light greenscreen flat and then shoot the plate, its so much better if you do it the other way round and give the subject some modelling. Just keep key angles quite steep so that the shadow falls off sharply.

Give yourself lots of light to play with on the background so you can overexpose the background slightly, remember not to chase the exposure, set it for the foreground then match the background, a dimmer for the background is very useful here.  On a full length screen you may find that exposing half a stop after you have eliminated the key shadow will be about right.

Make the background bright so there is lots of chroma information, a grimy looking green will not key as well.

With foot shadows I quite often use a shin buster, a light low down to flood soft light into the dark area between the feet. As long as it isn’t brighter than the main illumination it wont cause another shadow. Where this technique doesn’t work, with footballers with white socks for example,, try a pair of side lights just skimming the floor so the beam lights the socks, not the floor,. Reflected green light from the floor or unseen walls can cause the editor lots of problems, flag the incident light off or even put a black drape over the pars of the screen you are not using.

The best way to think of green screen is to consider it as a three-point lighting set up with a green background which is separate. Get exposure for the subject without any light on the screen, add light to the screen until it looks clean and check for any bleed through, such a green light on reflective costume and run a test. If you have the luxury of a lap top, run a quick key test on that.

To give you some ideas, have a look at http://www.tntfilms.co.uk/working-with-tnt/video-tourto see myself and Rob building a full length greenscreen set up on location.