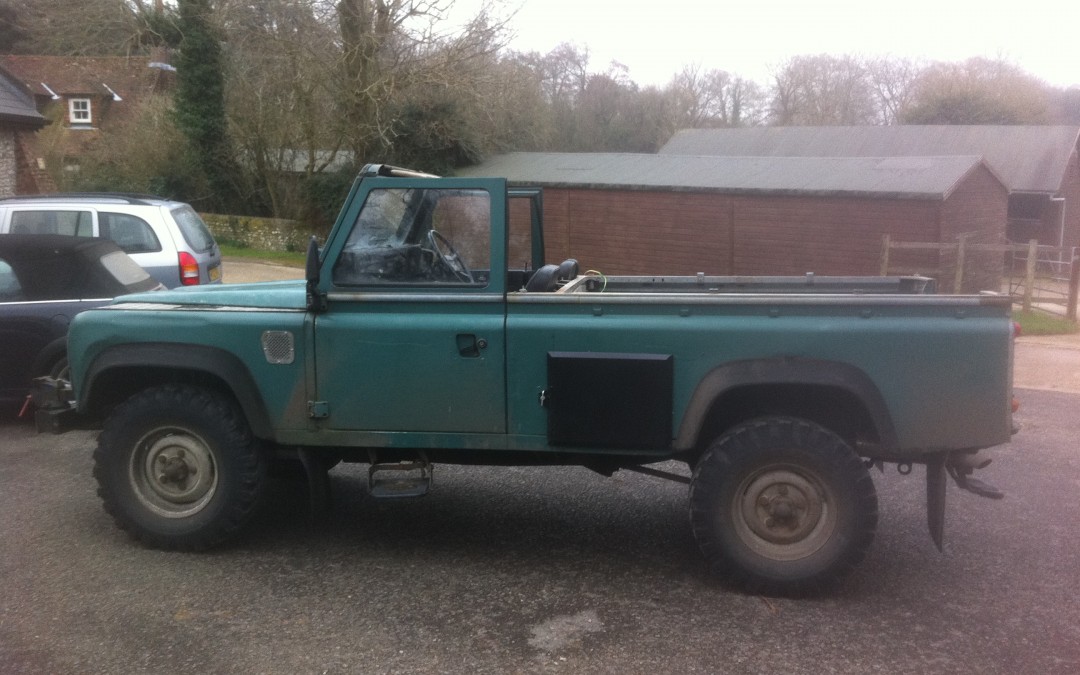 My new 24KVA location generator is finally finished, save a nice shiny coat of paint. Its been two years in the planning and a lot of hard work, many thanks to Neil Jones at Broadcrown generators who has been so helpful and always cheerful when I throw another curve ball at him.

A lot of generators need to be run at 75% of load maximum as the cooling or the actual rating of the engine is just to the power of the set rather then over specified, hence the hired gen set that breaks down three hours into the job. There is a big difference between a set for a building site and a TV spec set.

The biggest job is to get the set to fit the vehicle that you have decided will carry the generator. there was a spate of Land Rover gen sets falling over, normally on the motorway, due to excessive speed, centre of gravity too high and stability linked to standard suspension set ups.

My first job was to make the vehicle ready for the set. This included a more powerful engine and power steering, uprated brakes and extra suspension dampers, anti roll bars and helper springs. this keeps the vehicle upright under cornering and level front to back. It doesn’t compromise the off road ability although I think my bottle would go before the vehicle gave up. Consideration was also given to the electrics of the vehicle, as this could be used to power the 12v charging system of the generator. Putting in an interlink so that the two 12v systems could be linked in a crisis, such as the set battery failing, was important to the whole approach of building in redundancy, to ensure maximum reliability. The uprated brakes seemed a bit over the top until I loaded the vehicle, then they come into their own. The vehicle is about four tons and is a Class 7 MOT so its no lightweight.

The main design problem with the Broadcrown set was the power required and the physical space. To keep the centre of gravity low, the set was to be housed on the floor or the rear tub, not on the wheel arches as some sets are. This drops the CG about a foot which is a lot with the weights involved. The set had to be single phase for safety and I wanted 100 amps at 240volts. This sort of power is easily achieved with three phase but the dangers of phase overlap on a location are too high. Thankfully a high spec generator solved this problem.

Cooling and exhaust are another problem in a vehicle this size. Failure to get enough cool air into a hard working set is one of the biggest problems, causing thermal shutdowns. On my previous set, the cool air was drawn in via the rear door, which had to stay open. This then allows more noise to escape the vehicle and if the door is not open wide enough, hot air builds up in the set and the thermal shutdown problem occurs. This time i wanted to bring cool air through roof boxes, which could be baffled to reduce noise coming out against the airflow. At the hot end of the set, the exhaust was modified with another box added and a length of special hose to direct the exhaust downwards again. This makes the set extremely quiet. There was no room for the baffles to be put inside the profile of the vehicle, so I had baffle boxes made with hinged lids, so they are quick to open and close and stay closed when the vehicle is in motion.

To make the cable entry easier I had fitted a side entry box, low down on the nearside. This contains all the outlets and breakers for the set. Opening the door to plug something else in doesn’t change the engine noise so plugging during a take is easier. All the outputs are fed through MCBs and earth Leakage protection and each output is metered as well as summed on master meters. This means that all loads can be carefully monitored and any overloads easily spotted.

I removed the roof from the vehicle and the sides. I had commissioned new side panels with upward hinged doors, so that entry to the set and storage would be easy. The set was going to be supplied with cable distribution as standard.

The set was delivered to our premises and was prepared, which mainly involved putting in electrics for the interlink, fuel lines and more fireproof sound insulation.

With the vehicle in this state I was ready to fit the set.